Most Japanese have eaten pacific saury at least once in their life! Today we would like to introduce pacific saury, which is synonymous with popular fish! 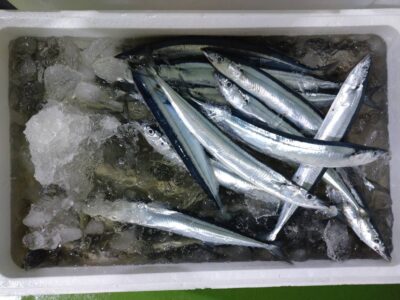 There are two types of saury, the one from Sea of Japan system and the other from the Pacific Northwest system, and most of the saury that are distributed in the market are those that migrate to the Pacific Ocean side. It is generally said that the season of saury is from Summer to Autumn, but nowadays, "frozen" and "dried" saury are popularly distributed, so you can enjoy it at the dining table all year round. However, "Pacific saury" is almost always associated with the fall of appetite. For Japanese people, it's an inseparable existence in the fall, the season of appetite.

Pacific saury, which is said to be the taste of the common people, has been widely eaten since the Edo period in Japan. Despite being inexpensive, pacific saury is rich in DHA which improves blood flow and is rich in nutrients necessary for the brain. It is also rich in vitamin D, which strengthens bones. It's a perfect ingredient for the growth of children!

Pacific saury has been widely loved by the common people, but in recent years it has decreased sharply. One of the reasons is the sharp increase in catches in China and Taiwan. As a result, prices have soared, and the high price of pacific saury's first auction is now a hot topic in the early Autumn in the market. pacific saury, which was called as the taste of the common people, has become a high-class fish... However, pacific saury is indispensable for Japanese dining table! !! There are many cooking methods, and how to enjoy saury. After all, the most popular one is simple grilled saury with salt.

There exists even a manner of eating grilled saury with salt. Bits of knowledge here! We’d like to introduce how to eat saury, which many people do not know exactly!

① Insert chopsticks along the backbone. ➁ Eat the upper half. ③ Move the liver to the edge of the plate. ④ Do not turn over and remove the backbone. ⑤ At the end, only the head and tail.

Your manners are Perfect with this procedure! Try the beautiful way to eat saury next time!

If you don't have to worry about table manners , fold the tail as the picture below, catch the gill with chopsticks, and pull fish head to remove the bones, it’s would be easy way to eat and please try it!