Home 【November 2021】With the excellent rich flavor, Seko-Gani (Snow crab)can only be enjoyed just in this season!

【November 2021】With the excellent rich flavor, Seko-Gani (Snow crab)can only be enjoyed just in this season!

It is the season when the leaves of the trees turn red.

Seko-Gani (Snow crab)are landed in the market, and it is a beautiful sight to be seen the floor of the fishing port is filled with bright red Seko-Gani. 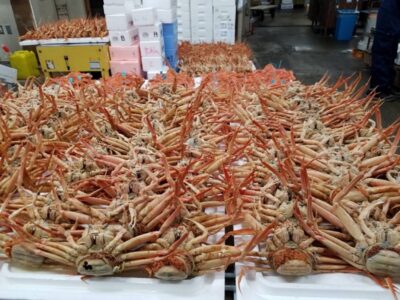 Seko-Gani is the name given to female snow crabs with roes, which are caught mainly in the San-in region, Japan sea coast of the west of Honshu (main island of Japan).

Male snow crabs are also called by different names depending on the region, such as the famous "Matsuba Gani" (in the San-in region) and "Echizen Gani" (in Fukui prefecture).

The female snow crab, Seko Gani, is smaller than the male which repeatedly sheds its skin and grows larger, weighing about 300 grams at most, with the usual size being 150-200 grams.

However, the female crab has two types of eggs in addition to the rich crab miso: the red meat of the immature ovaries in the shell, called “Uchiko”, and the dark-colored mature eggs in the abdomen, called “Sotoko”. 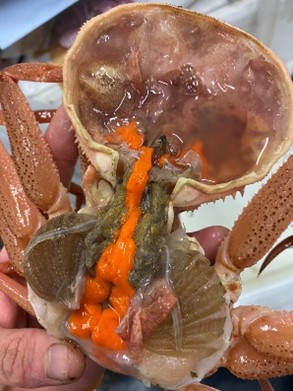 Eggs inside shell of Seko-Gani（Uchiko）

“Uchiko” has a very rich flavor, and it is exceptional when you eat it mixing with crab miso.

“Sotoko” has a popping texture like that of herring roes and is said to be even more delicious when marinated in soy sauce.

All of these are very delicious crabs that can only be enjoyed during this season.

In recent years, it has become very popular among gourmets. 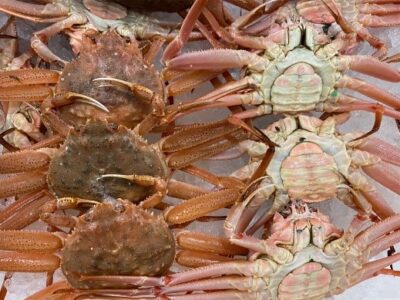