We would like to introduce Sakuramasu (Cherry Masu salmon) and Sawara (Japanese spanish mackerel), fresh fish representing this season of Cherry Blossoms!

This salmon is named “Sakuramasu” because it is caught a lot in the season of “Sakura” cherry blossoms in spring.

It is mainly caught in Hokkaido from April to June.

It is commonly eaten as meuniere, Saikyo yaki (grill with saikyo miso) and Sushi.

You can enjoy the taste of this fish when you freeze it after filleting into three pieces and peeling, because it becomes sweeter and more savory.

This fish has thin shape and is said to be named Sawara, standing for narrow (狭, Sa) Belly (腹, hara).

Sawara is said to be in good season from March to May in West Japan and November to February in East Japan.

At this time of year, Sawara caught in Kansai area is very delicious.

Sawara has different names depending on growing process.

As it grows longer, it is called Sagoshi → Nagi → Sawara.

It is commonly eaten in Grilled with Salt/ Saikyo miso etc.

We also recommend Sashimi and Yakishimo zukuri (Sashimi with the roasted skin). 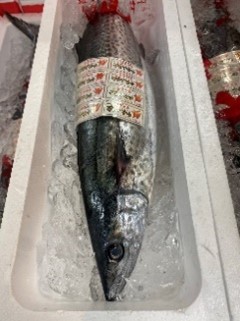