This year, the rainy season(Japanese called 梅雨/Tsuyu/) was observed earlier than usual.

We would like to introduce sardines, which are in high season from around June.

From June to July, sardines are setting fatty in order to prepare for the spawning.

During this season sardines drink the mineral-rich rainwater and they become especially delicious.

In Choshi City, Chiba Prefecture in Japan, which has the largest amount of sardines catching in Japan,

sardines during this period are called "Nyubai sardines(Rainy Season Sardines)."

Normally, sardines can be easily purchased at supermarkets, but "Nyubai sardines" are treated as branded products. 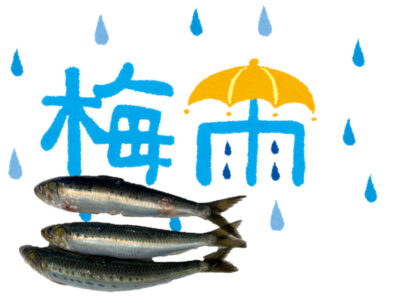 Sardines, about 20 cm in size, are characterized by spots on the body side.

During the rainy season, which is difficult to spend with dampness, we tend to loss appetite and energy,

Nutritious sardines are rich in DHA, which improves blood circulation, EPA, and vitamin B2, which is good for relieving fatigue.

Let's eat many sardines and get more engery!

Fresh sardines can be enjoyed as sashimi.