Skipjack tuna is said to be born mainly in the warm southern seas, and from spring to early summer, they migrate northward in pursuit of squids, sardines, sauries, and other fish. The skipjack tuna caught during this northward migration is called "Hatsu-Gatsuo" or "Nobori-Gatsuo." In the Edo period (1603-1868), it was commonly eaten as the first fish of spring for its good fortune, and composed in the Haiku, the poem characteristic of Japan, "Me ni Aoba, Yama Hototogisu Hatsu-Gatsuo" (Yamaguchi Sodo). The skipjack tuna during this season is characterized by its refreshing and fresh flavor, and is enjoyed as sashimi or tataki.

After traveling north to Sanriku and sometimes even to Hokkaido, they return to the southern seas in the fall after gaining plenty of nutrients during the summer. The skipjack tuna caught during this season is called "Modori-Gatsuo" or "Kudari-Gatsuo," They are so delicious with toro-like flavor that they are called “Toro-Gatsuo.” Because of its fatty taste, sashimi is recommended. 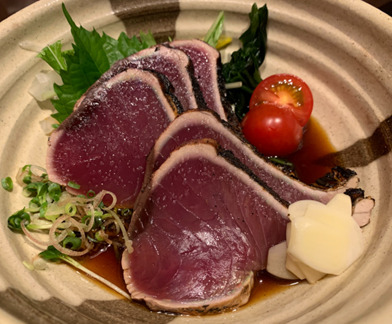 Skipjack tuna is a delicious and nutritious fish.
It is a red meat fish like tuna, and compared to white meat fish, it contains more protein, DHA (docosahexaenoic acid) and EPA (eicosapentaenoic acid), which are very good for the body and essential for health, and its blood parts contain a lot of vitamin A, B1, B2, B12, and iron.
DHA activates brain function, EPA helps to smooth the blood flow.
In particular, “Modori-Gatsuo” is rich in unsaturated fatty acids such as DHA and EPA.

Please eat the highly nutritious “Modori-Gatsuo” in season to reset your summer fatigue!