Interview with Japanese Diabetologist Yoko Iizuka: Making Medicine a Bridge for Exchange Between China and Japan 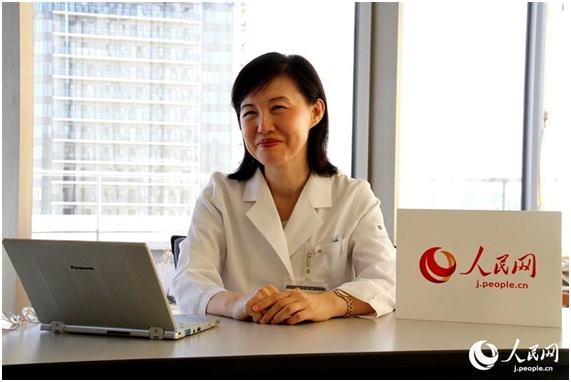 Dr. Iizuka, deputy chief of the Department of Diabetes and Metabolic Diseases, the University of Tokyo Hospital, responding to a People's Daily Online interview (photo by Zheng Jin)

In China, too, the number of patients with lifestyle-related disease is on the rise. For example, the number of patients with diabetes is increasing. According to statistics of the World Health Organization (WHO), there are more than 100 million diabetic patients in China, and this has a serious impact on health, society, and the economy. Dr. Yoko Iizuka, a famous Japanese diabetologist who often visits China and performs free medical examinations for diabetic patients, was interviewed on the prevention and treatment of diabetes as well as cooperation projects in the related medical fields between China and Japan. (Reported by People's Daily Online)

Dr. Iizuka has been engaged in the clinical practice, research, and education of diabetes for more than 20 years at the Department of Diabetes and Metabolic Diseases of the University of Tokyo Hospital.

She has a close link with China, saying, "My father is Chinese and my mother is Japanese. I was born and raised in China."
This is why Dr. Iizuka has special feelings for China. She has also served as a member of the international medical exchange, survey, and research committee of the Japanese Ministry of Economy, Trade, and Industry and a member of the Japan-China Medical Exchange Council of the Japan China Medical Association, promoting medical exchange and cooperation between China and Japan.

In 2010, she was invited to give a lecture on diabetes treatment in China and visited two Grade 3A hospitals (highest-class hospitals in China). This was the beginning of her involvement in projects on diabetes treatment in China. After seeing quite a few patients with diabetes, she began to feel that she wanted to share with China the treatment philosophy and experience she had accumulated over many years.

It was just at a time when the Japanese government was soliciting proposals for projects to promote medical service internationalization. Capitalizing on this opportunity, Dr. Iizuka applied for the project after returning to Japan, and took the lead in providing free medical care for diabetes and carrying out related medical exchanges in China.

Hearing about this, a hospital in Hangzhou, Zhejiang Province, sent an offer to Dr. Iizuka's medical team. She returned to Japan from Shanghai, adjusted her schedule, and then visited Hangzhou with her medical team in the same year to provide free medical care.

In addition, Dr. Iizuka's team went to Beijing in 2015 for the third round of free medical care in China. A total of more than 600 patients with diabetes were treated in these three visits. In 2014, Dr. Iizuka received the Nakasone Yasuhiro Award (Encouragement Prize) for her contribution to the promotion of medical exchanges between China and Japan.

On the basis of many years of clinical, research, and educational experience, Dr. Iizuka practices "team medical care." According to Dr. Iizuka, Asians' ability to secrete insulin is much lower compared with Westerners, and patients often develop hypoglycemia in China, where dose amounts are comparable to those in Western countries; however, rigorous restriction of what they eat and drink can make them feel depressed and distrustful of the treatment regimen.

Based on much trial and error, Dr. Iizuka now believes that it is of importance to provide a "team medical care" in which doctors, nurses, pharmacists, and dietitians work together to treat patients, with the primary focus on improving diet, exercise, and lifestyle and the secondary focus on drug therapy. Doctors provide medical care, nurses provide diabetes education and foot care coaching, dietitians provide guidance to improve eating and lifestyle habits, and pharmacists provide medication consultation. By continuing treatment that is clearly and reasonably defined at each stage, patients can be proactively engaged in treatment, resulting in a better therapeutic effect.

Dr. Iizuka thought that treatment methods in Japan would be effective in China as well because the Chinese and Japanese are of the same East Asian ethnicity. Thus, she undertook free medical care in Shanghai, Hangzhou, and Beijing with her medical team in the way she usually provided team medical care in Japan, and the results turned out to be excellent. In Shanghai, an elderly man aged about 80 years with a diabetes duration of more than 20 years received treatment by the team and was told that he could eat anything as long as he pays attention to calories and dietary balance. The patient received medical consultation five times between October 2011 and February 2012, and there was a notable improvement in his condition. The patient handed Iizuka a letter of thanks at the time of his last consultation.

As a result of free medical care in Shanghai, Hangzhou, and Beijing, many patients in China have now learned about "team medical care" practiced by Dr. Iizuka. According to Dr. Iizuka, "More than 100 patients have come all the way to Japan for treatment in recent years."

Making medicine a bridge for exchanges between China and Japan

Having been recognized and expected by many Chinese patients, Dr. Iizuka, who has a close link with China, has further strengthened her desire to build a bridge between the two countries by promoting exchanges and cooperation in the field of medicine. Laying out her objective, Dr. Iizuka said, "Making full use of the expertise and experience I have accumulated over many years as well as my Chinese-speaking ability, I would like to establish a cooperation base in both China and Japan including clinical practice, research, and education, with an integrated system covering prevention, diagnosis, and treatment of diabetes."

He added, "China is now facing rapid aging of its population and the number of people suffering from lifestyle-related diseases including diabetes is sharply increasing. Various sectors in China are focusing on how to improve their lifestyles and promote their health. Japan, an aging society taking the lead in addressing this issue, has introduced the concept of 'preventive health care,' beginning with an improvement in the lifestyle, with a focus on the prevention of diseases, especially those related to aging. For example, there are specific goals in the treatment of diabetes, namely primary prevention (prevention of onset), secondary prevention (prevention of complication), and tertiary prevention (prevention of organ damage due to complications). Our hospital would like to contribute to China's health businesses by sharing Japan's experience in this field with persons involved in medical science in China and patients through visits and interactions." 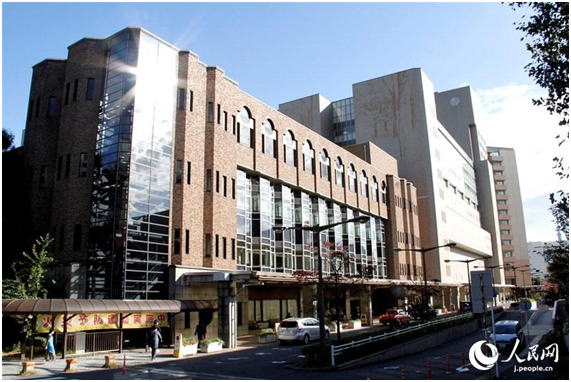 The University of Tokyo Hospital (photo by Zheng Jin).